So I made a flower for the new ribbed hat. May I also take a moment to note that the hat? Is mostly knitted in purl. So purl folks, knock your collective selves out.

I found this flower pattern on the most excellent Knitting Pattern Directory – Flower Pattern 2. Even though it calls for a different yarn and size 8 needles, I used the super chunky (same as the hat) and size 10s (same as the hat).

It’s super cute. I still am without a digital camera! But the video function is cool so tomorrow I will model. Tonight me and my man friend Greg had our own Christmas, and now we’re drinking wine and watching Amadeus. Actually Greg is napping and I’m making the same hat in leftover gray yarn, possibly for Greer? Possibly for Mom? TBD. More to come. Amadeus is funny!

The reason why I love this movie so much is that I love a good historical dramatization of something, but also F. Murray Abraham. A couple of years ago, I worked at a start-up ad agency where one of our clients was MSG,who at the time still did A Christmas Carol. They alwayd hired some tired old B-list former famous actor to be Scrooge because it was a HUGE draw to be “Oscar-nominee” fill in the blank. He came on the set and there was a smattering of applause, and he said, “The F stands for Famous.” No one could tell if he was being completely self-aware, that he was an oscar-winner now reduced to playing Scrooge at MSG? Or was he demanding that we all address him as a big star because he won an oscar like 16 years before? It was all very weird, and funny. F, you’re a big star in my eyes.

PS – Gray version of hat with fleur knitted and completed for my friend Kate’s 31st birthday.

And now I’m ready for the decrease. Rib row means row 1, not the cable row. After the first decrease, I now have 53 sts. Is that right?

I am decreasing steadily according to the pattern, and the percentages are working out (ie, the 53 sts are correct, and they continue to be so). I think I am going to end up with all knit sts – and I think I do a ssk to keep the right-leaning knit pattern. Actually, it was ktog, well, I ended up doing a combo of both but it didn’t really matter b/c it only needed one last decrease before I was done! DONE! and it’s cute! It’s very snug on my head, which is a pretty normal sized head. If I were making this for my friend Devon who has an enormous noggin, I would start a bit larger.

Now, on to the fleur…but for the moment, here’s the base hat (uploaded with my new Flip camera).

Ok, ready to make the swirly-do hat with fleur, from Lauran Blogi. Except the only white or white-ish yarn I have is Twinkle’s handknit super chunky. And because I’ve waited until the last moment for custom holiday gifts for friends, now I must…dum dum dum. Modify this pattern! I’ve never done this before. I hope I don’t fuck it up. Is it a good idea to do this for the first time when the instructions are in Norwegian?

I know nothing about guage. I should. Maybe I’ll learn one day. I hope this isn’t the day. But anyway – I cast on 48 sts of Twinkle handknit super chunky on a 5mm circular needle. Fingers crossed!

It seems to be working. Because I’m an idiot, and also I think because the yarn I’m working with is so thick, I’m using a cable needle (well just a single dpn; I don’t own a cable needle) and doing this cable-style. The instructions I needed (and ass-umed, which turned out to be correct), is that for the first row (knit 1, purl 3), you knit the knit and purl the purl. Er, the 3rd and odd rows, since you repeat rows 1 & 2 ongoing.

Size 10 circs too long in length. To be continued!

Holy crap, I’m on Ravelry! I feel like I just got accepted to college.

I went to Stitch Therapy  on Lincoln and 7th ave in Park Slope last night…the nicest, coziest, most non-threatening yarn store on earth with the simple idea of going in and buying some size 7 needles I need for that upcoming Ysolda project I keep fantasizing about.

And then I went to the sale corner…and bought like 8 more chunks of Malabrigo. In a delicious creamy Orange Julius and then a couple in a pretty robin’s egg blue. These are the kettle dyed worsted weight yarns…they’re soft and versatile and the colors are beautiful. The sweater I’ve [temporarily!] abandoned was a beautiful cranberry kettle dyed Malabrigo.

Christmas presents, right? Too bad it’s December 13th and I’ve not even started. I have a problem. Stitch “Therapy” is not the kind of therapy I need for this. 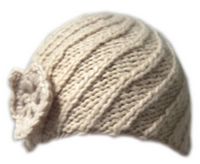 Maybe I should just freaking knit the stuff I’ve bought yarn for. However, when on supremely boring conference calls, I troll the internets for new stuff. And thus, I’ve found New Fantasy Patterns. Probably I’ll never knit them, but it’s good to dream.

For a long time I wanted to make this Amelia Earhart cap, it was this groovy retro looking thing in a weird rib worked back and forth. It looked too complicated for me, but here’s one that’s more my speed. And it has a flower! Which I can’t do! Because it’s in Dutch, isn’t that weird? But no, there’s English instructions and I think I’m just going to use a free knit pattern for a fleur.

And then there’s this cool Anthropologie-inspired capelet. Making this means I have to find a cool sparkly to bring it all together. As Dom DeLuise said in The Secret of Nimh, “Thparkly!!”

So it’s been a while. I hosted Thanksgiving (albeit for only 3 people) but hell I made a damn turkey. Also, our digital camera is busted, thus making a blog about knitting projects difficult to chronicle. I could draw a picture? Here’s what Knit and Tonic, where I bought the pattern, says it looks like. Mine isn’t as nice.

Ok so I took a break from the sweater. Too much of the same color, I nearly jumped out a window at several points. In the meantime, I churned out a couple of small projects that I hope to give away as gifts. A couple of hats I made on a very bumpy Friday night flight from LA to JFK the week after Thanksgiving. Flight attendants are ALWAYS interested in what you’re knitting. I made the Aspen hat from Wenlan’s Big City Knits, and then made my own design (just a regular old hat in seed stitch – turned out pretty cool). I bought a crapload of her yarn online and it’s pretty nice but holy jeebus – essssspensive. Like $18 a hank. I don’t pay enough attention to the yardage or what have you I just go by the all inclusive “hank”.

Best part about work travel (aside from the miles you can rack up for your own personal use, which I never actually take advantage of) is the free time with no phone calls or blackberry service. Aside from a honeymoon, it’s the only time work folk just accept that they’re not going to get in touch with you. After that, you’re fair game.

However. I finished a set of mittens on that trip (NYC to Dallas, Dallas to LA). Satisfied, I admired my handiwork as I packed up my stuff and prepared to leave my seat. Soft gorgeous Debbie Bliss alpaca silk in a groovy looking green and gray stripes. And I LEFT THE DAMN MITTENS on the plane. I’ve rarely been so pissed at myself. I am retarded.

…serenity now. I’m over it, I think. I’m here on my couch, finally attacking red sweater again and having a nice big glass of Syrah (Smoking Loon – always under $12 at Shawn downstairs). Smoking Loon, it turns out, is a Sebastiani family wine. Me likey.

Finally, my tree is up and decorated. If I had a camera I’d snap a photo – it’s real purty and putting me in the holiday spirit (in addition to the actual spirits I’m imbibing). The cherry on top of this Monday night is White Christmas on TV – one of my favorite holiday movies. I tend to goob out a bit at the holidays. Danny Kaye and Bing Crosby are hilarious, Rosemary Clooney and…the attractive blonde with the great legs. IMDB tells me she’s Vera-Ellen. She was like Ann-Margret of the 1930’s – 40’s.

I’m secretly glad the man-friend is out this evening…better I keep my bourgeosie holiday proclivities to myself.