Okay, for some reason this never got posted the first time around. I now have vastly shorter hair which is far less blonde, since in the time I originally wrote it to now, I’ve weaned myself off of peroxide in a box hair color and now actually go to a professional. AND I’ve worn these hats about 50 times. AND Mira Nair made a biopic about Amelia Earhart starring Hilary Swank. So, without further ado:

I have traditionally treated digital cameras the same way I treat the $14.99 disposable cameras from CVS – like they’re disposable and stuff. Honestly, I’m on camera #4. Or maybe this one is 5. Either way, I’ve got some FO’s to show off. I’m so excited, they’re MF FO’s though. They deserve some profanity. They’ve been waiting in the wings for so long.

This was from head hugger patterns, I made it from some Sublime Angora Merino I got on sale. It’s a really pretty lavendar, but oddly enough the color is called Clover. I knitted this on a couple of plane flights in July, to and from Chicago and Dallas and the like. Because it’s mohair, little tufts of mohair goodness kept fluffing off and landing usually on the pant leg of some person next to me on the plane. I’m sure they loved me. Here’s a solo shot of the hat: 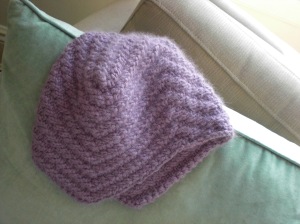 Did you know? Amelia Earhart was kind of a feminist icon. Her wikipedia entry is insane. And she was gorgeous and fashionable and she had a gap tooth like me!

And then I did it again in another cool sale item, Sahara brand’s worsted weight Camelhair (55%) and Merino (45%). It’s soft and nice, and I knit double up to get gauge, same as the Sublime.