One of many things I like about my man-friend are that we agree that gifts are fun but experiences are better, so we decided to hit storied Half Moon Bay for his birthday weekend. It’s usually a stone’s throw from SF, but this weekend happened to be the Mavericks Invitational, in which super famous and floppy haired surfers convene around a world renowned spot for tasty waves. So while we made great time for the first 13 minutes of our trek, the last 5 miles were 2 hours instead of 2 minutes. Parking illegally, walking into the beer garden without a ticket, and we didn’t even see any actual surfing (they keep people from the beach for safety). However, it was sunny, hot, the 49ers won the NFC championship, and all was right with the world.

In addition to staying here, and having a room that had a real fire pit in it (well, outside of it), w 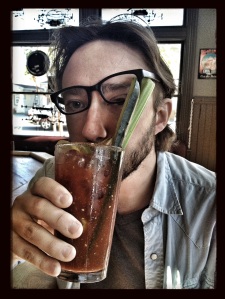 e also tooled around the downtown Half Moon Bay, which was utterly delightful on a holiday weekend. We stopped in at the San Benito House, right on the main drag, lured in by the promise of the “Best Bloody Mary in the Bay!”. Hey, advertising works. Turns out, they meant HMB, which includes maybe one other bar/restaurant, but it seriously was a phenomenal bloody – the secret apparently being the addition of lots of smoked paprika. Greg certainly enjoyed it, even if the massive celery stalk proved somewhat challenging.

The other signal that HMB is a winning town in my book is that they had a yarn store. Fengari is full of yarn ideas, books, projects and has a ton of inventory in the back. The lovely ladies working there were kind and helpful, but not all up in your grill. Aside from the fact that I already had about a zillion projects underway, I simply could not help myself – I bo 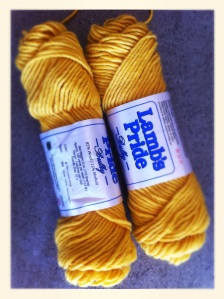 ught a beautiful bright lemon yellow yarn, with the idea that I might make the lovely swing sweater pattern I’d seen a few months ago in Knit Simple. Here’s the good news, the news of my improvement: I bought cheap yarn. I bought yarn which had a sign next to it that said, “Good for Felting!” which might as well mean, “Wipe your ass with this!” I don’t care – it’s a solid wool, slightly scratchy, and incredibly cheap Lamb’s Pride in bulky weight. If I am still going to battle my uncontrollable yarn urges, at least I will make them more economical. This color is called Lemon Drop, and it’s bright, but a slightly darker “lemon” color – as if you added some Dijon mustard to it. It’s actually 85% wool and 15% alpaca, so not entirely a hairshirt experience.

The Knit Simple Bell Sleeve Turtleneck is a really cute design, although I loathe the garter stitch. I really do. There, I said it. It looks JV. It looks dumb. It looks like worms worming around each other, especially in bulky yarn. So I decided it would 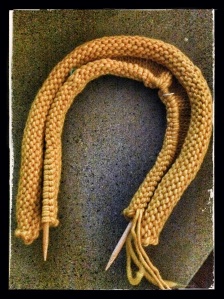 look better in stockinette, realizing there would be a roll at the bottom, but thinking I could live with it. After, oh I don’t know, 25 rows or so, this bitch was still rolling. Rolled up like a rugelach, or a rug. Rolling, in a way that was just wrong. So, I’ve just taken it apart, and starting over. The question is, do I follow the wormy garter stitch pattern? Or do I do a tiny garter border and keep it in stockinette, as I wanted originally? What a cliffhanger! Tune in again in about 6 months to find out. See how I roll.